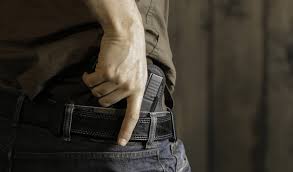 It is often said that “there is a lawyer [or attorney, or lawsuit] attached to every bullet.”  In today’s litigious society, that is probably pretty accurate.

Although I am primarily a business attorney, I spend a fair amount of time as a firearms instructor for a civilian training company and at a local law enforcement academy.  I teach all of my students — both law enforcement and civilian alike — that in a gunfight, we must first survive physically, then mentally/emotionally/spiritually, and finally legally.  The funny thing is that many of my students are most afraid of the legal ramifications of a shooting, sometimes more than the prospect of the gunfight itself.  The legalities become even more pressing when you contemplate the possibility of accidentally shooting an innocent person in the context of a self-defense or defense-of-others situation.  I started thinking about this scenario after coming across this news article out of Las Vegas, where a jewelry store security guard shot and killed a store employee while he was attempting to stop a robbery.

So, what are your liabilities if, in a genuine self-defense (or defense-of-others) situation, you accidentally shoot an innocent person?

I’m not going to go into a whole lot of detail regarding what constitutes justifiable use of deadly force, i.e. self-defense.  Suffice it to say that if you reasonably believe you are in imminent danger of death or serious bodily injury, you are probably justified in shooting.  See Ala. Code § 13A-3-23.  So, assuming you are legally justified in shooting, what happens if you hit an innocent bystander (or law enforcement officer)?

Notice that the criminal must be attempting to commit a crime which is inherently dangerous to human life — the only time that use of lethal force in self defense is legally permitted.  So, if someone is trying to steal your lawnmower from your tool shed, you would not be justified in shooting.  But if someone is trying to steal your child from their bed, you are clear to use all the lethal force necessary to stop them (be sure of your target and your aim!).  In that situation, if your bullet misses its target, exits a window, and strikes your neighbor mowing their yard, you should not be held criminally liable for your neighbor’s injury or death — the kidnapper probably will, even though you fired the bullet!  In fact, Ala. Code § 13A-3-23(e) states that you can’t even be arrested unless the police think that your use of force was unlawful.

So if you can’t be held criminally liable, can you be sued?  The answer to the question “Can I be sued?” is always a resounding “Yes.”  Anyone can sue anyone else at any time for anything.  Filing a lawsuit is merely a matter of time and money — if you are willing to take the time and pay the filing fees (and possibly attorney fees), then you can file a lawsuit.  Period.  The pertinent questions are: “Will they be successful, and how quickly can we get the lawsuit dismissed?”  Those are questions of law.

So, let’s start with the statutory law, specifically Ala. Code § 13A-3-23(d)(1).  That section states that “[a] person who uses force, including deadly physical force, as justified and permitted in this section is immune from criminal prosecution and civil action for the use of such force, unless the force was determined to be unlawful.”  Notice that the statute says that you would be immune from criminal and civil actions.  Like I said, that doesn’t mean that you won’t be sued; it does mean that you should be able to quickly get that lawsuit dismissed under the self-defense statute.

In 1 Whart.  Crim. Law, (9th Ed.) § 488, the author says: ‘It is conceded on all sides that it is enough if the danger which the defendant seeks to avert is apparently imminent, irremediable, and actual.’  Bang v. State, 60 Miss. 571; Shorter v. People, 2 N.Y. 193; Logue v. Com., 38 Pa. St. 265.  And the same rule of immunity extends to civil as to criminal cases.  If the injury was done by the defendant in justifiable self-defense, he can neither be punished criminally, nor held responsible for damages in a civil action.  Because the act was lawful, he is wholly relieved from responsibility for its consequences. 3 Bl. Comm. 121.  The case of Morris v. Platt, 32 Conn. 75, fully illustrates the extent to which immunity goes.  In that case it appeared that the defendant when assaulted had fired in self-defense, and, missing the assailant, had wounded an innocent by-stander, and the court held that the party thus assailed was free from both civil and criminal liability.  The act which he had done was lawful, and without negligence, and no one, not even a third party, not an assailant, but an innocent by-stander, could make him answer in damages for the injury occasioned thereby.

Well, there you go.  No less than the U.S. Supreme Court has said that if you shoot in justifiable self-defense and accidentally hit an innocent by-stander, you cannot be held criminally or civilly liable for the resulting injury or death.  Although we usually (correctly) assume that we are responsible for each and every round we fire, and any and all damage created by it, this is one instance when that is not entirely true.

Going back to the Las Vegas news article, if you read it you will notice that the robbery suspect will face murder charges for the death of the sales clerk, even though the security guard fired the fatal shot.  That is an application of the felony murder rule.  You will also notice that the security guard will not face charges.  His actions were lawful, and therefore he cannot be held liable.

Having said all of that, let me strongly encourage anyone who intends to own and use a firearm for defensive purposes to train diligently with your gun(s).  There is a world of difference between being legally acquitted from liability, and being able to live with yourself after shooting an innocent person.